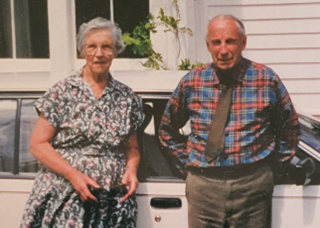 Home > Our Stories > The Lysaght-Watt Fund

In 2016 The Lysaght-Watt Fund was set up with Taranaki Foundation (then Te Karaka Foundation) becoming one of our initial Founding Donors. The Lysaght-Watt Charitable Trust was established in 2008 and provides funding within the Taranaki region, in particular supporting Arts, Culture and Heritage.

Mary Watt (Muriel Mary Lysaght 1917-2005) grew up in Mokoia, South Taranaki.  Mary came from an artistic family and was the granddaughter of the artist Jane Stowe and cousin to artist John Lysaght Moore. Mary studied with the NZ Institute of Horticulture (1946-1949) and the Royal College of Art in the School of Architecture (1950-1951) to then pursue a career in landscape architecture.

Jack Watt (John Harold Watt 1912-2006) was born in Waipukarau, the youngest child of George and Florence Watt. Jack studied Sciences, Agriculture and Commerce. Jack won a Nuffield Scholarship to study in the United States attending Cornell University from 1950 – 1952.
At some stage in the early 1950s, Jack Watt met Mary Lysaght. They were married in 1953. In 1965 Jack was appointed Assistant Director of the Horticulture Division of MAF. A position he held in Wellington until his retirement.

Jack and Mary spent their retirement years in Wellington residing on Sugarloaf Road in Brooklyn. They were well regarded in their local community for their gardening influence and interests.

Jack and Mary Watt (nee Lysaght) left a significant portion of their respective Estates for the creation of the Lysaght-Watt Trust. Their connection to the area remained steadfast through family ties and the original Lysaght family farm at Mokoia. Both Jack and Mary are interred at Hāwera Cemetery.

Once the Named Fund reaches $50,000 Taranaki Foundation will make distributions to support local charitable causes, in line with the fund purposes at the discretion of the Trustees of the Foundation.

Empowering and enhancing the lives of people living with disability